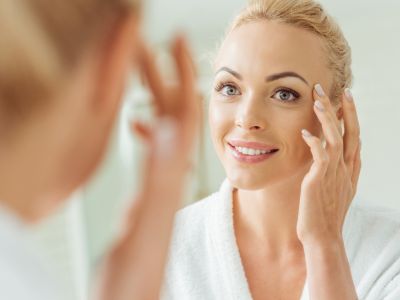 The biggest problem in the world of anti-aging over-the-counter products is that despite glamorous marketing and high price tags, they don’t produce the results we want.  The global anti-aging market in 2018 was estimated to be $134 Billion because the face really does matter.  It matters because despite the common cliché “don’t judge a book by its cover,” society does.  In this case, the book is Identity, and the cover is the face.  As our population has aged (humans live three times longer today than we did 200 years ago) the image of who we know ourselves to be in our minds no longer matches the image we see in the mirror.  We get improperly judged by others as “ tired, unattractive, past our prime, etc” when we aren’t and that isn’t fair.  But the problem is made worse when the solutions to making the cover more accurately reflect the book don’t work – leading many into my cosmetic surgery office to discuss more invasive and expensive options.

The reasons commonly given to explain why over the counter products don’t work are largely myths.  Myths like: “they’re JUST creams,” or “the products I tried were a scam” or my favorite, “my face is too far gone, I guess I just need plastic surgery.”

Consider the possibility that the right combination of ingredients can work wonders on the appearance of the face, but the reason the products you have tried haven’t pulled this off, is because most of them aren’t even getting to your face.  As a surgeon, I can’t operate on a problem over the telephone.  And yet the big skin care corporations are telling you to get great results by slathering their products on … your “almost face.”

I say “almost face” because the surface of the face is actually a thick layer of dead skin cells that are designed to keep your insides in and the outside world out.  The greatest products in the world pulled out of the box and put directly on your face are sitting on this dead skin layer mask that your body has intentionally put there (it doesn’t know you are trying to help it).  What’s more, for faces that are weathered, sun exposed, and inflamed from inconsistent face care regimens, this layer is even thicker.  Creams can’t work miracles, alter gravity, genetics or time but neither can my scalpel.    And yet the potential of creams to create noticeable, powerful and profound cosmetic improvements in how the face looks hasn’t, in my opinion, even been closely maxed out.  And it’s because the industry (run by businessmen in suits, not facial plastic surgeons in white coats) has failed to understand priming.

Priming – just like it sounds – is the process of getting the face ready.  Like opening the door for the really cool ingredients to actually do their thing.  We’ve known about the power in this process in plastic surgery for years, frequently priming the face of our patients before cosmetic treatments because the cosmetic results of those treatments is so much better when this is done.

Think about it this way, the thicker the outside layer of dead skin is, the less of the active ingredients of whatever you put on the face is ever going to reach the face at all (and that product that doesn’t reach your face is doing about as much for your looks as the product that you left in the bottle – nothing).  So we want to reduce the distance the products you use have to go to get to their destination so that more of it gets there.   To do this, we have to respect how the skin functions.

When it is threatened, damaged or neglected it responds by trying to protect itself so that it can try to heal – sort of like a caveman wounded by a bear would build a shelter and pile rocks or logs in the doorway to prevent the bear from coming in and causing more damage while he/she tried to rest and heal.  Because the “threat” is coming from the outside world, the way it does this is by increasing what’s called Epithelial Cell Turnover, which is a fancy term for “makes even more dead skin cells to make that outer “protective” barrier even thicker.   To make it thinner, we need to stop the ongoing damage and then fix the problem (sort of like dealing with a leaking pipe – stop the leak first, then fix the water damage; because if we just go about fixing the water damage first, we won’t see progress as more and more water comes out of the pipe to cause more damage).

Stopping the “leak” when it comes to aging of the face means: 1.) shield it from what is damaging it to prevent even more injury; 2.) give it the building blocks it needs to heal the damage.  Then, to fix the problem (too thick an outer layer of dead skin cells) we need to clean the face of excess dead skin cells without triggering the skin to replace them.

So how do you actually pull this off in real life?

It doesn’t take reworking your whole daily routine.  Believe it or not, just a small tweak to what you are likely already doing can move mountains.

Priming step 1: clean your face, but do it without causing damage.  Most people are surprised to learn that soap (used in a majority of facial cleansers) can actually cause damage.  This is because of how it works.  When mixed with water, soap creates tiny little bubbles called Micelles that surround “stuff.”  If the “stuff” is something we don’t want, this is a good thing, because the micelles surround it and rinse off with water.  The devil is in the details though.  For this to actually clean, the “stuff” needs to be disrupted from the surface with friction (ie. scrubbing) so the micelles can surround small pieces of it.  This works great on your tabletop or your car hood.  But the face is made of living cells and when they experience friction, they ADAPT by increasing cell turnover and increasing the thickness of the dead skin layer (stratum corneum) just like the formation of calluses on the hands of weightlifter or laborers.  THAT doesn’t help us in the priming game.

Sericin, the protein in spiderwebs that catches insects because it binds to the keratin in their exoskeletons, is perfect for this because keratin is also the primary protein in dead skin cells.  I designed my Serisilk Skin Smoothing Cleanser (silk worms also use sericin in their cocoons) specifically for this purpose on the face.   I recommend washing the face with this in the morning and again at night before bed.

Priming step 2:  Protect. It’s estimated that 92-95% of the aging appearance of the face is from UV sun damage.  So it stands to reason that the highest performance, lowest maintenance way to stop damage, is to protect the face from UV rays.  That means a sunscreen.  I recommend 30 or greater.

Keep in mind there are a three types of ingredients out there to get the job done: physical agents like zink oxide; chemical agents like octinoxate; and, anti-oxidants like vitamin C.  I recommend using a product with all three and ideally with a moisturizer too, since the sun is extremely drying to skin, and dryness causes inflammation, increased cell turnover and defeats the purpose of our priming regimen (my DNA Shielding Complex has all of these features so feel free to try it, but if you have another product that does this too, ok to continue with it).  Use this product every day after washing your face.

Priming step 3:  Repair.  Creams can’t heal, only the body can do that.  But what we can do through creams is give the body the fuel it needs.  This is where healing vitamins come in.  Cutting to the chase, the highest yield vitamins for this are A, B3 (Niacinamide), C, D and E.  I combined an idealized ratio of these – along with sericin so that the ingredients stay on the face instead of ending up on the pillowcase – in my DNA Restoring Cream.  But regardless of how you give your face this fuel, I recommend a healthy dose nightly before bed and after washing the face.

By cleaning without injury, shielding from the source of damage, and giving the face the fuel to fix – you will be perfectly priming the face for getting the most out of cosmetic ingredients to come.  I recommend at least 4 weeks of this regimen to optimize priming.  You will likely be surprised at how good your face looks just by doing this.  In fact, many of my patients have decided after priming, that they look so good they don’t need anything else.